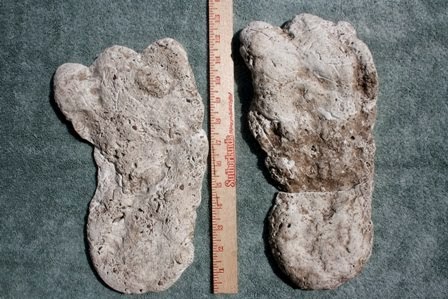 Posted by Utah Paranormal Files at 8:15 AM No comments:

Does Sasquatch travel the San Rafael?

This has always been a working theory for me and recent findings that we have discovered might just point to this. The San Rafael Swell and Cedar Mountain areas of Carbon and Emery counties, both consist of a vast wild area connecting the Boulder Mountains to the west and the Book Cliff Range to the east. This would make for a much shorter roadway for the Sasquatch to utilize than by traveling in a much longer arching route through the Fishlake National Forest, the Wasatch Plateau and Manti. A majority of the Carbon County sighting reports that we have received, are located in alignment with this possible path-way or roadway. The tracks we find both head towards and come from the direction of Cedar Mountain and the San Rafael Swell. The areas along this path-way are very remote and rugged with very little intrusions of humans. A majority of people who visit Cedar Mountain or the San Rafael, don't wander very far from roads or campgrounds in the area and the vastness of remote canyons and gullies supply endless hiding spots. One needs to really know this area I'm referring too and as I stated earlier, this is only a theory, but one we are going to investigate fully.

Ron Johnson
Kevin Allridge
Posted by Utah Paranormal Files at 8:17 AM No comments:

My partner Kevin and I, had found big foot prints on the San Rafael, in southeastern Utah. With all the local sightings in Carbon and Emery counties lately, I have postulated that the San Rafael could possibly be a roadway between the Boulder Mountains and Book Cliff Range. Four years ago, I had found giant tracks in the snow near Cedar Mountain, and these tracks were approximately 21 inches long and had a span (step) of a little over 6 1/2 feet long. These were exactly identical to tracks I found near C Canyon (Book Cliffs) one year after finding the tracks near Cedar Mountain. Same Bigfoot creature, maybe and I believe that it could very well be the same one. On the night of 07-30-2016, my partner Kevin Allridge and myself (Ron Johnson) had found large tracks down on the San Rafael in Emery County. We had found these early in the day, but didn't have time to cast them, as we wanted to attend the International Days burn out contest in Price, UT. I knew that by attending this event, it would put us very late in getting the cast made. This wasn't much of a problem for us as we do a lot of our investigating at night. After arriving to our destination, we quickly found the tracks and decided which one to cast. The time is approximately 11:45 PM and we are waiting for the plaster to dry enough to pick up, when we start hearing a strange voice yelling or screaming at us. After a while I turn on my voice recorder. I scream back at it and it responds back by mimicking my voice. I'm in no way insinuating that this is a Sasquatch, but only suggesting it as a possibility. In May of 2012, Kevin and myself had an encounter with a Sasquatch in the C Canyon area of southeastern Utah and the grunting we heard during this 2012 event, sounded the same as the grunts at the end of this video, that we heard on the night we casted these prints.

Posted by Utah Paranormal Files at 8:24 PM No comments:

On the afternoon of 05-29-2016, a resident of Price, Utah (wishes to remain anonymous) contacted my partner Kevin and related a strange encounter she had while traveling back home from Salt Lake City. At the last turn before dropping into Price Canyon, she noticed a large hairy creature standing on two legs, near the shoulder of the highway. This would be on the southwest side of the road, near where the highway is held up by large pillars. The creature had dark brown, almost black looking hair on its body, didn't move nor make any sounds. She drove farther down the Canyon to a wide spot and stopped long enough to regain her composure before continuing home. This location is in close proximity to an encounter in 2002 (UBH-10033) by two Arizona deer hunters, a 1955 encounter on the old highway (UBH-10020) and an encounter with two dirt bike riders in the early 1970's (UBH-10017)
Kevin and myself went to the location of the sighting to look for evidence. I found this hair sample approximately twenty feet from where she said the creature stood. The hair still has follicles attached the them and has a greasy plastic like feel to it. I showed the sample to four different horse experts in the area and they didn't know what it was. We are going to send it off for DNA testing and when I receive the results, I'll post it to this article.
Ron Johnson
Kevin Allridge

Posted by Utah Paranormal Files at 3:18 PM No comments:

I hear about Sasquatch encounters all the time, from people of all walks of life. This is the first time I ever heard a story like this from a seven year old. Lots of parents will dismiss stories like this as pure fantasy, not believing anything that a young person has too say, and parents who do, are completely missing the mark. Parents should listen too what their children have to say.

A few months back, I took a friend to Home Depot in Provo, UT to get some outside paneling for her house. She didn’t own a truck, nor had anyway of transporting these 4x8 sheets of paneling, so we took my truck. When I picked her up, she told me that her 7 year old grandson was coming along. From Helper, it’s approximately a seventy mile trip to Provo. After loading the paneling into my truck, we started out for home. There wasn’t much of a conversation on the return trip, as we both were just listening to the seven year old grandson of my friend talk about school. After a while he started telling me about his friend, who talks with him, whenever he goes camping in the mountains by Salt Lake. First off, I would like to say that I’m telling this story the way that he told it to me. In the summer months, he would go camping with his aunt and uncle from Salt Lake quite often and this is where his friend comes to light. He kept telling me about this friend and I assumed that it was just a friend of his who went along on these camping trips, until he mentioned that it was a Bigfoot who was talking to him. When he said this, I started to pay attention. He told me that whenever they go camping in the mountains by Salt Lake, his friend Bigfoot will always come close to where they camp, too talk to him. I asked him if the Bigfoot scared him, he told me that he didn’t come into camp, and that he wasn’t afraid of him. He talks to me, but he is not there with me. He is hiding in the trees, away from where we are camping, whenever he talks to me (telepathy?) My aunt and uncle won’t let me go off by myself and I have to stay in camp. My Bigfoot friend wants me to come visit him, but I’m not allowed to leave camp by myself. I didn’t want to lead him in any way with questions, so I decided to just let him talk. He asked me if I knew how a Bigfoot sleeps and I told him that they will sometimes make a bed out of tree branches or make a primitive shelter. He told me that his friend lives in a cave not too far from where they go camping in the mountains by Salt Lake. He asked me if I was afraid of Bigfoot and I told him that I wasn’t. He told me that the next time they go camping in the mountains by Salt Lake; he will have his friend Bigfoot talk to me. He continued to tell me about what he liked to eat, and how they have to hide from people. He told me that only nice people, who don’t want to hurt him, are allowed to see him. When we arrived in Helper, he told me that there we’re Bigfoot in the mountains by Helper and that he has talked to them too. I asked him if he had learned this in school, and he told me that we are not allowed to talk about Bigfoot or we will get into trouble. All in all, he had a pretty incredible story to tell. I asked my friend, where did he learn so much about Bigfoot? She told me that whenever he gets home from these camping trips, he always has these Bigfoot stories to talk about.

On 08-22-2015, a Price, Utah family of three was driving up Huntington Canyon to spend the day fishing at Mammoth Reservoir. When they got to the Crandall Canyon turn off, their seven year old son become very excited and asked what kind of an animal that was standing off into the trees. They come to a complete stop in their lane and then they noticed the upright animal first seen by their seven year old son, standing there. This creature reminded him and his wife of the character in the movie Harry and the Henderson’s, as it stood on the edge of the pine trees next to Huntington Creek. They told us that this upright standing animal was approximately 7 ½ feet tall, with long golden brown hair that had black accents mixed with it. This animal never moved, all the time they were stopped. He grabbed his camera and was going to take a picture of it, and then it started to make a loud growling or grunting noise. At this time his wife and son were becoming very upset and wanted to leave this area immediately, so he threw his camera down and quickly drove away.

This area of Emery County, UT has had numerous sightings over the years, from Nuck Woodard Canyon to Millers Flat. In 2012 there was a forest fire that ravaged through the areas, not more than one mile from this recent sighting location and with all the surrounding damage, this could be a reason for the most recent sightings. Floods, land slides and tons of debris constantly flow down from the side canyons and bare mountain tops, from local thunder storms and rain showers, that keep the local wildlife moving.

On the night of 08-13-2015, a truck driver leaving Wheat Ridge, Colorado (Denver) was traveling west on interstate 70 towards Idaho Springs, when a big tall ape like creature ran across the interstate on two legs, just ahead of his truck. The driver could only guess on the height and that it was considerably taller than the hood on his semi truck, guessing maybe 7 ½ to 9 feet tall. He had to rapidly slow down his truck, but said that he didn’t come close to hitting it. His name and the name of the company that he works for will remain anonymous; too protect his identity and job. He said that other vehicles, both trucks and cars, were trying not to hit it. This incident happened approximately half way between the Co 103 and the town of Idaho Springs.